“When we saw the Iridesse, we knew it was the perfect fit for our operation – so much so that we purchased two,” said William B. Contessa, who acquired the company in January this year, along with partners John Fitch IV, the great-great-grandson of the company’s founder, and a European investment company. “It was an easy decision as the press enables us to credibly go after key industries, such as advertising, and opens up new applications for our existing customers.”

About 80 percent of the Fitch Group’s business is with financial firms, processing sensitive financial data to produce Securities Exchange Commission filings, prospectuses and various financial reports and documents – much of it as monochrome output. While the company also produces color books, booklets and marketing materials, the new leadership team is expanding capabilities and looking to break into new markets with high-end color printing.

“We settled on Iridesse for its image quality that rivals offset, its operational ease and the creative possibilities of its digital embellishments,” said Fitch IV. “Every job we’ve run so far has been met with unanimous approval from existing clients.”

The Iridesse Production Press is the only digital press that can print metallic gold or silver, CMYK, clear or white dry ink in a single pass. In addition to providing the color image quality and embellishments the firm sought, the press’s new long-sheet capability (13" x 47") will enable Fitch Group to produce three-panel brochures it previously turned down or farmed out. Printing at 120-ppm, the new presses boost productivity and contribute to the faster turnaround that their customers demand.

“We get a lot of calls on Sunday night for things people need on Monday morning,” Contessa said. “It’s very advantageous to be in Manhattan. There’s only a handful of us left, and that’s part of our value proposition: We’re here!”

The Fitch Group plans to market their new Iridesse-based capabilities with a direct mail campaign that is currently under development, sample books based upon press explorations by Fitch Creativ, the creative arm of Fitch Group and one-on-one meetings with customers and prospects.

About the Fitch Group
The Fitch Group is a privately held print and design firm that was founded in 1886 and has been owned by members of the Fitch family ever since. The firm has been a Xerox customer since the 1950s, when Xerox was the Haloid Corporation and the Fitch Group used a Xerox Copyflo device to create plates for offset printing. Separated decades ago, credit ratings agency FitchRatings has its origins as part of the Fitch Group, then Fitch Publishing.

Following displacement from its former Cedar Street address near the World Trade Center after the Sept. 11, 2001 attacks, the firm reinvented itself as a digital printer. 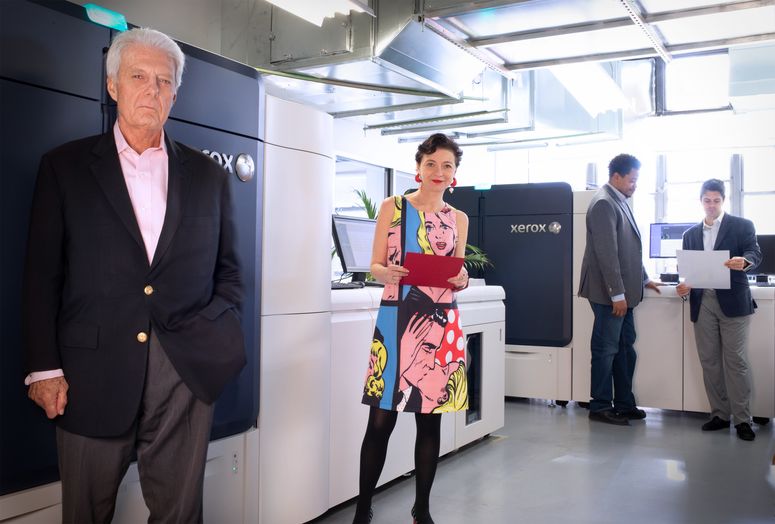