A Legacy of Making Work, Work Better. 25 Years Ago, the Xerox DocuTech Initiated Print on Demand

This month, Xerox (NYSE: XRX) is celebrating the 25th anniversary of a product line that forever changed printing and transformed the way people work in the office by connecting the dots between documents and electronic office equipment.

The Xerox DocuTech 135 Production Publisher, announced on Oct. 2, 1990, revolutionized the way businesses produced common office items such as advertising brochures, newsletters and sales reports. The new product line made it possible to receive electronic images of documents from remote computers, store them, allow them to be edited and shared over computer networks, and generate documents of print-shop quality at high speed.

“It has been a tremendous asset to Samco Printers over the last 25 years,” said Sam Hirji, president of Samco Printers, which still uses an original DocuTech 135 Production Publisher in its daily production cycle in Vancouver, Canada. “It’s hard to imagine a day when there was no viable means for a commercial printer to print directly from a computer to a high-speed production printer. The DocuTech forever changed that.”

The DocuTech 135 Production Publisher spawned digital print on demand, an alternative and complement to traditional commercial printing methods. DocuTech’s innovation was in combining the steps of the printing process – job preparation (prepress), printing and finishing – into new electronic workflows that led to faster, nearly immediate turnarounds, and low-cost short runs.

The DocuTech also played a role in succeeding waves of innovation including the transition from analog office copiers to multifunction digital devices that scan, fax, copy and print, as well as the development of variable-information printing, which uses data to personalize documents at a massive scale. In the process, it has helped hundreds of commercial and corporate print shops around the world build highly successful businesses.

Xerox received a 2005 National Medal of Technology and Innovation award, the highest technology honor the United States confers upon its citizens, for having “created the modern reprographics, digital printing, and print-on-demand industries." By 2011, the digital print-on-demand industry had an annual global retail value of $66 billion1. Notable technologies that drove DocuTech’s innovation include:

The DocuTech’s development program spanned a decade and involved several thousand engineers. “One of the biggest challenges the team faced was how to make a machine that performed seamlessly in a space that was not yet defined,” said Randall Hube, manager of Litigation & Strategic Technical Services in Xerox Intellectual Property Operations, and also a member of the DocuTech development team. “We always had a sense, even from the beginning, that we were doing groundbreaking work and it was going to be very special.”

About two dozen DocuTech models were brought to market, successively refining the architecture that revolutionized the business of printing with an “order-then-distribute-then-print” business model to precisely meet demand. In traditional processes, large runs of books, marketing materials and other pieces typically are printed, and then distributed to stores and warehouses for ordering.

About Xerox
Xerox is helping change the way the world works. By applying our expertise in imaging, business process, analytics, automation and user-centric insights, we engineer the flow of work to provide greater productivity, efficiency and personalization. We conduct business in 180 countries, and our more than 130,000 employees create meaningful innovations and provide business process services, printing equipment, software and solutions that make a real difference for our clients – and their customers. 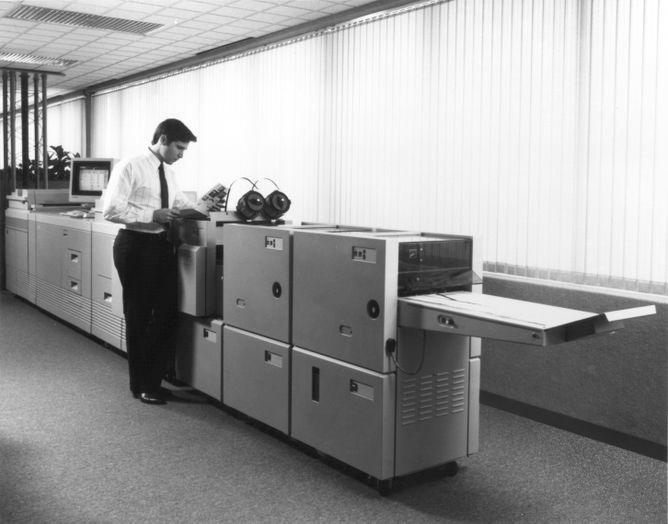 The Xerox DocuTech 135 Production Publisher ignited the digital print-on-demand revolution with its introduction in 1990, forever changing commercial printing and transforming the way people work in the office.

The Xerox DocuTech 135 Production Publisher ignited the digital print-on-demand revolution with its introduction in 1990, forever changing commercial printing and transforming the way people work in the office. 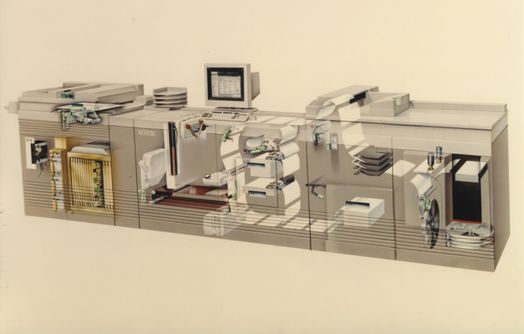 Inside view of the DocuTech 135 Production Publisher
Download (6.4 MB)

Inside view of the DocuTech 135 Production Publisher